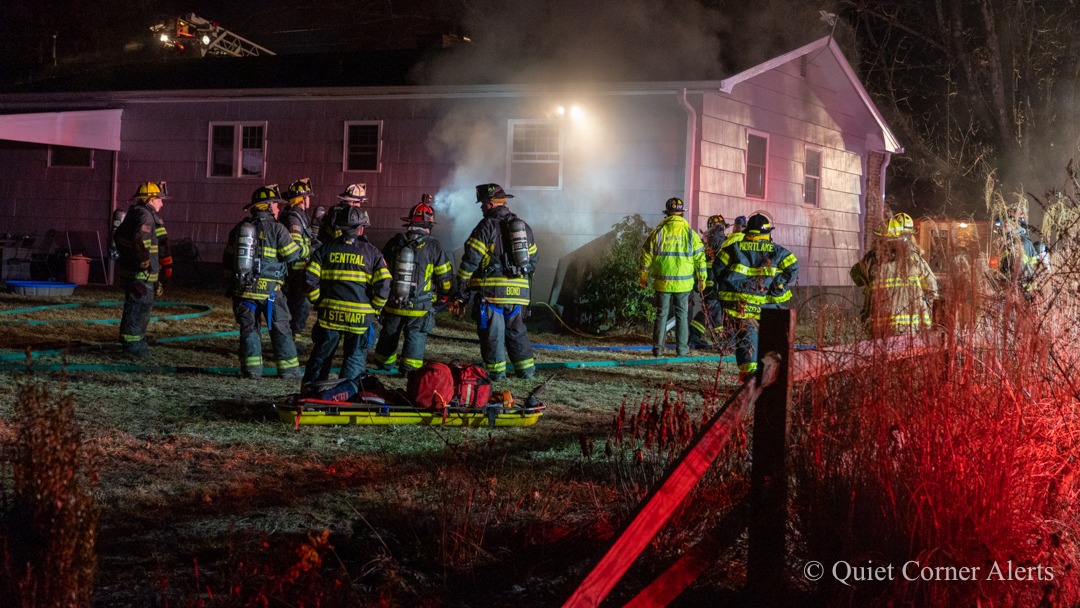 Brooklyn, Conn. - Area firefighters were able to contain a basement fire to just a single room and its contents on Tuesday evening.

At approximately 8:06 pm on Tuesday, December 20th, 2022, the Mortlake Fire Company, along with mutual aid departments, were dispatched for a 1st alarm structure fire at 98 Grandview Terrace, the fire was reported as a fire in the living room.

According to Mortlake Fire Chief Steve Breen arriving crews found a smoke condition in the home, but it was initially unclear where the fire was. Crews made entry into the basement and were able to determine the area of origin of the fire and get it quickly knocked down.

Chief Breen said he did start several additional tanker units, in addition to the 1st alarm assignment, as a precaution but fortunately, they were not needed. Mortlake's water tender was also standing by at a nearby school to pump water from the hydrant system if additional water was needed on the scene.

The fire was contained to the room of origin, but the rest of the home did sustain extensive smoke damage. The red cross will be providing assistance for at least a few nights until the residence is habitable again.

Chief Breen went on to extend his thanks to all of Mortlake's mutual aid partners saying "Without everyone's help this doesn't work. It is fantastic to have such a great team around us."

No occupants or firefighters were injured in the fire.

Chief Breen added that this was the "maiden voyage" for Mortlake's new primary attack piece, Engine Tank 190 (ET190), which has been in service for approximately a week and a half. Acquiring this apparatus took nearly two years with a committee considering every aspect of the design to include, the tank size, pump size, and layout of the truck with the final cost coming in at approximately $720,000. Supply issues also contributed to the two-year timeframe to build and deliver the truck. The new ET-190 is a 2022 Spartan with a 1500 GPM pump and 1200-gallon tank and replaces the former ET-190 which was 27 years old. Chief Breen finished by saying that everything performed well with the truck during its first real fire.