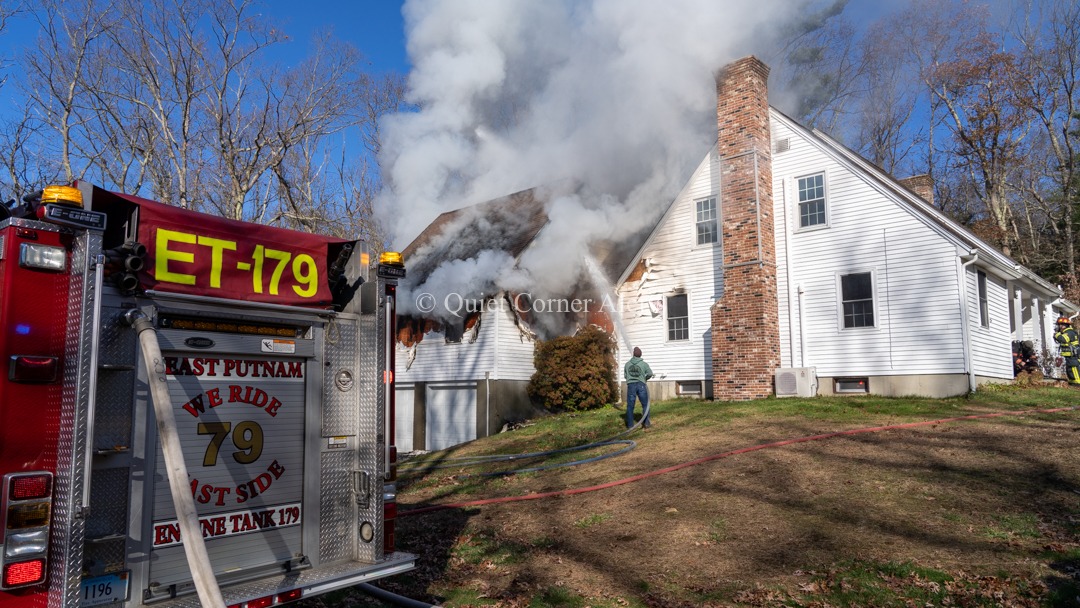 At approximately 10:45 am on Tuesday, November 22nd, a 1st alarm was struck for the East Putnam Fire Department, and their mutual aid companies, for multiple reports of a working structure fire with heavy fire showing, at 26 Liberty Highway.

Bystanders tell us they were driving by when they saw the smoke and stopped to report it and knock on the front door to raise anybody possible inside.

East Putnam Fire Chief Abe Walker stated that on the arrival of the first unit they confirmed there was heavy fire showing from the addition on the B/C corner (back left) of the building. Companies made a quick exterior attack before transitioning to an aggressive interior attack where they were able to hold the fire to the addition on the back corner of the structure.

Chief Walker went on to tell us that at the time of dispatch, the East Putnam Fire Department, which is entirely volunteer and normally requires members to respond from their homes or place of work during the day, was just returning from a medical incident and were able to respond immediately to the fire, which played a major factor in rapidly getting water on the fire

Prior to Chief Walker's arrival, he requested extra tankers, in addition to the 1st alarm companies, knowing that there was no water easily accessible in the area and that long tanker shuttles may be required.

The Putnam Fire Marshall is investigating the fire and while an exact cause is unknown that this time, Chief Walker was able to tell us that a likely location of origin had been determined at the time of the interview.

According to Vision Property Records, the home was sold on October 28th, 2022. A local realtor, with close ties to the new owners, confirmed this and told us the new owners had not yet fully moved into the home.

Chief Walker went on to thank his mutual aid companies for their response as well as their hard work conducting the aggressive attack. Crews were able to continuously rotate in and out of the structure to maintain their aggressive posture.

No injuries occurred during this incident.

The fire was held at the 1st Alarm level with the addition of numerous Tankers.

It is unclear if the home will remain livable after this incident due to the large amount of smoke that made it into the home as well as the unavoidable damage that comes with firefighting operations.